Why discuss Navigation in a travel blog?

Of course, recovery from becoming lost also requires a discourse on communication styles. (A cursory discussion is all that is possible within the bounds of a mere blog.)

Navigation implies a goal: travel to a new location.  Which assumes some frame of reference that includes both here and there.

The classic presentation of multiple locations is a map: a visual representation of part of the earth’s surface that is easily understood across cultures and languages.  An early effort to present the known world was done by Claudius Ptolemy.  His map of his home (Alexandria, Egypt) and its environs (circa 150 AD) implemented coordinates (latitude and longitude) that, in slightly modified form, are still part of our reference scheme.

Ptolemy’s interest was based on navigation of both land and sea.  But, there are practical differences.

Obviously, there are no landmarks on the open sea.  Although the Mariner’s astrolabe (1295), the geometric quadrant (1460), and the sextant (1757) enabled calculation of latitude, it was not until 1737 that the marine chronometer enabled calculations of longitude. The process of land navigation has always been much simpler. 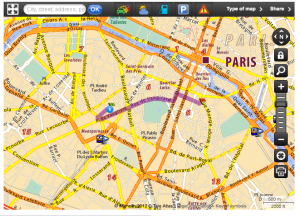 The clear value of a dynamic GPS system is that it shows current location: (e.g. “Where am I?”).  That information is redundant, unless one is “lost.”

What does lost really mean?

In the traditional context of the Bicycle Adventure Club, no one is ever really lost – merely exploring a new set of roads before, eventually, reaching the destination.

Interestingly, many people find both unnecessary: just ask a local person for guidance.

Travel in France in 2011 produced a minimal number of “new of road explorations” – we were often in rural areas where there were few decisions (few roads!) – and, the signage was excellent.  Of crucial importance, one of us is fluent in French, making requests for guidance from local folks enjoyable and effective.

In Italy in 2012 some real adventures occurred.  More complex road systems, poor signage, and a language barrier.  (Usually, we can get by with our three functional languages: English, French, and Spanish.)  But, in northern rural Italy, the languages are Italian and German.

And, on our worst day, one of the most generous of Italian motorist offered to help.  “Oh,” she said, “If you want to reach that city, you are lost.”  “I will slowly lead you to the correct road.”  She drove slowly, and we pedaled as furiously as we could to keep up.   Eventually, she waved and sped up.  She was done.  She had lead us to the quick route to our destination city.  Unfortunately, the quick route was the rural equivalent of an expressway – a death trap for bicycles.

Since we are writing this, we appear to have survived – and, eventually reached our goal: a lovely town in Italy.  We eventually found a good map: one that was granular enough to show both our current location and the small roads that we were supposed to be on…  But, it was more of an adventure than some of us had desired.

To be fair, there is no perfect navigation system.  However, by combining courtesy with a sense of humor, the adventures are not just tolerable; they are a source of understanding about the culture of travel itself.

Being a bike rider on a Bicycle Adventure Club tour is a bit like doing the “20-minute Louvre” in Paris – you’ve been there, and seen lots of stuff – but, no time for exploration and reflection.  (This is not a criticism – merely recognition that many bike people are not interested in a leisurely tour of the museums and cathedrals of every city visited.  Indeed, one could spend the summer in the northwest of Italy and still feel that the visit had been far too cursory.) 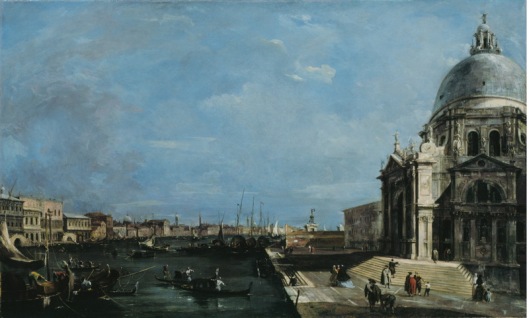 A View of The Grand Canal

The artistry of the current generation of glass blowers is still extraordinary.  Liquid sculpture that exploits inherent transparency and translucent flows of light.  Marvelous inventiveness beyond what any machine can produce.  The intersection of true visual creativity and consummate technical skill.

These skills have been protected since the end of the 13th Century when all the glassmakers were sent from Venice itself to the island of Murano.  Part of the rationale for the relocation was to avoid a fire within Venice – a potential catastrophe.  Part of the rationale was to ensure that no artisans would be able to escape to establish a competing source of glass anywhere else in Europe.  Photography of the majestic pieces is, consequently forbidden.  And, of course, the price for a piece of beautiful sculpture often contains a comma amid the numerals…

The creation of one of the most influential sea powers ever within the Mediterranean area is the subject of books – and, impossible to compress into a coherent blog entry.

But, the intersection of religions, cultures, and technologies has been an impetus to progress since earliest times.  The Venetians combined all of their skills with their extensive knowledge of the surrounding countries to develop a prosperous civilization.  Even the Crusades, at the end of the 12th Century, were used to augment the power of a growing nation-state.

(When Crusaders arrived to take possession of the fleet of boats that they commissioned for the transport of soldiers and the capture of Jerusalem – and, blithely announced that compensation would be made after the successful conquest of the Islamic rulers of the Middle East – the Venetians explained that there were other payment options.

Consequently, the Crusaders, ostensibly intent on returning Jerusalem to Christian control, became the mercenaries of a pragmatic maritime power. And the epicenter of Christianity, Constantinople, fell to the Venetians.  Indeed, much of the magnificent art and decorative sculpture of Venice is the booty of that ad hoc military-religious campaign.)

And, did we mention the Basilica of St. Mark?  Interior photos not permitted.  But, references abound.

Three days of wandering about Venice is not enough! 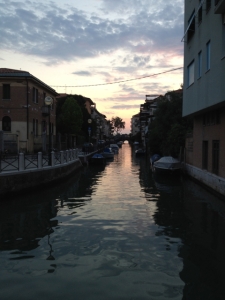 Next entry: navigation – not Venetian maps of the world in the 14th century, but how to get from point A to point B by bicycle.

Context – Beyond a Bike Adventure

The usual meaning of adventure in a vacation context is enjoyable excitement.  But any physical adventure has some risk.  There are insurance policies to deal with missed flights (critical plane changes can occur), lost baggage (may be quite inconvenient, especially if in a new city each night), and unforeseen events of any type (including medical emergencies).

Unfortunately, as we set off on the next leg of our journey (Vicenza to Padova), one of our riders fell.  Some falls are not serious: a scrape; a loss of bike paint; a minor scar to remember the wet cobblestones of a particular city…  But, this fall was serious: a broken femur requiring surgery with two pins.  Non-trivial for a young person; serious for a woman in her 70’s.

Unaware of the accident, a delightful ride with minimal navigation difficulties in the relatively flat area of Italy.  As we approach the coast, the Austrian influence fades: gone are the snow-capped mountains; no more German-speaking towns; and palm trees replace fruit trees.  (By this point, 24 riders have separated into individual groups of 4 to 7 members – identical riding pace; collaborative navigation styles; complementary sense of humor when temporarily lost.)

Given a relatively short distance (34 miles), we arrive in Padua in time for lunch, an opportunity to settle into a new hotel, a brief wander about the city, and preparation for our tour of the University of Padua and its famous medical theatre. 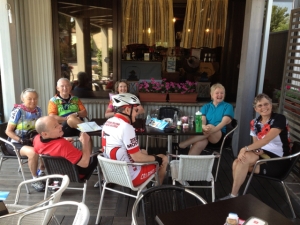 Lunch on the Road

The spirit of scientific inquiry in the fifteenth century extended to investigations of the human body, despite the opposition of the Church to the practice of dissection.

Extraordinary progress was made in an expansion of knowledge in this university, and our tour was permitted a view of the famous (initially clandestine!) Anatomy theatre of Fabricius ab Acquapendente.

Even a few moments to visit the Basilica of Saint Anthony of Padua.

Despite a weather forecast of only 10% chance of rain, the day dawned cloudy, cold and bleak.  Some of us donned rain gear; some did not.

And, the ride was longer than most: 45 miles to ride and two ferries (with a connecting ride) to the island of Lido, just south of Venice.

Given the desire to arrive as early as possible, we decided to eat a quick breakfast and get on the road.  Soon, the dark sky soon began spill a few drops of cold moisture.  Then, a steady rain created cold puddles on the bike trail.  But, fortunately, a bike path with easy navigation – not slippery cobblestones in a maze of city streets.

Eventually, the sun returned.  A bit of warm food at a ferry stop.  An escape from the wind.  A new mode of travel for the next few days: boats.