Sunday was our first day on the road, but this time with our new cycling buddies, 26 of us in all.  After a Saturday night  group dinner at  the Hofbrauhaus, where we were entertained by live German music and traditional dances in lederhosen, we took off  by coach bus, towing our bikes in a trailer behind us on Sunday.  We drove through parts of Germany, Austria and  Switzerland happy to take in extraordinary views of alpine mountains and meadows.

The highlight of the day happened as we entered Burgeis, Italy.  Janet, the petite but rugged bus driver stopped at the sign to enter this little town, and there, we all saw the sign indicating that buses were verboten.  Randy, one of the ride leaders assured Janet that the passage, though tight, was possible as he’d done it before on another tour. Low and behold, we crossed a tiny bridge, rounded a corner, and it became quite obvious that passage through the town this way, was, indeed, not possible.  Soon, everyone in the village was stretched around us, with the “mayor” of the Burgeis,  a toothless man wearing an official cap, was circling us in a tiny red truck, trying to help as Janet tried repeatedly to back the bus across the bridge without jackknifing the trailer.  Which, of course, happened every time.  After a half an hour of repeated tries, I was certain that Janet would be arrested, and we would be left to cart our bikes and luggage across the city.  Finally, the guys on the bus and those watching outside, unshackled the trailer and pushed it out of the way.  Janet was able to move us out! We did manage to walk our bikes down a long hill to our lovely  hotel, by passing stables for cows (and, yes, smell like a barnyard) throughout the little village.

With enough time left in the day,  we saddled up for a check out ride, and rode down, down, downhill into Mals, another village, and then we rode and walked, walked and walked our bikes back up to Burgeis fighting winds of 30 mph. Not pleasant, but wonderful scenery. 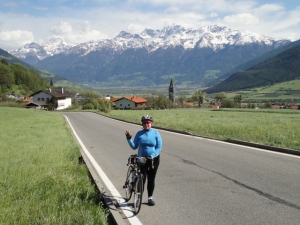 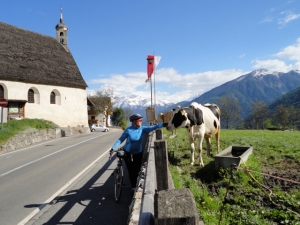 The is a reason this  is called the Bicycle ADVENTURE Club.