One of the thrills of international travel is jet lag: adjusting to a time zone shifted by 6 hours. One way to prepare for two weeks of bike rides (30 miles / day) without complete exhaustion is to start a few days early.

And, if cheaper airline tickets are available in a nearby city (with high speed train travel to Paris) – why not depart a few days before and visit the most bike friendly city in the world: Amsterdam?

And, what do to in Amsterdam but book a tour with MIKE’S BIKE TOURS?

With only mild exhaustion – and, a slight chance for reasonable weather, off we went.   A delightful time.

One of the advantages of bicycle travel is that it is possible to have a delightful experience in an unknown city with unique traffic conventions – and, intermittent rain.

With an experienced tour guide, exploration becomes a street level view of a European city.  Newness itself is inspirational: it helps us see traditional realities from a unique perspective.  Of course, delightful people are vital.  Our spirited tour guide (an Amsterdam native) with boundless energy, extensive knowledge of the city, a enchanting goth appearance, and an effusive sense of humor, was a catalyst for receptivity to a vibrant culture.

Part of the culture – and, a solution to intermittent rain – was to stop for a break near the end of the tour, as the drizzle increased to honest-to-goodness rain.  At 11:30 am, I would usually pick coffee as a good beverage for a rain delay.   But, in the Netherlands, real bikers opt for a Kopstootje, a shot of Genever (Dutch version of gin with juniper berries and spices), washed down with a glass of beer, and (to cushion the stomach) a hard-boiled egg.

Amsterdam’s culture includes a population of 800,000+ people – and, 800,000+ bikes.  Old, new, well cared for, rusty and worn…  Single speed, old fashioned, new fangled…  A cacophony of two-wheeled vehicles – and, adept riders.  Only an adept rider could zip through complex traffic patterns while texting – and, survive. 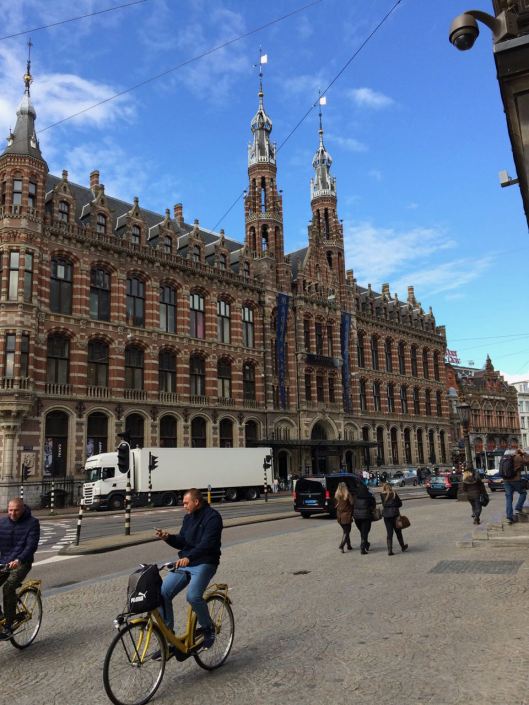 It would be a formidable stretch for most US cities to change from “bike as recreation” to “bicycle as transportation” – an integral part of getting to school and to work.

Or, just to become a destination for happy tourists.

after a stop for Kopstootje

Although It is wonderful to explore the world where bicycles are an integral aspect of life, European travel presents a world of experiences where art and history are always in evidence.

So, for Joy and for me, the Anne Frank House and the Van Gogh Museum were essential destinations in Amsterdam.

Compared to the Roman ruins visible from a bike in much of France, in contrast to the soaring gothic churches of a millennium ago, the horror of the Holocaust is recent.  My father served in Europe in World War II.  My work in Washington, DC enabled two visits to the US Holocaust Memorial Museum.

The visceral experience of a single family – a sensitive young woman with ambition, insight and charm, and her father (the sole survivor of the concentration camps) – should penetrate the collective soul of all mankind.  And, the enormity of the millions who died – all unique people with unique gifts to offer the world – should prevent future atrocities.

We humans are capable of extremes of both compassion and destruction.  The Anne Frank House images and significance – both extreme intolerance and sacrificial service – were a constant echo as our bike rides in France and Belgium unfolded during the next two weeks.

Vincent Van Gogh’s visionary service to humanity was the underlying vision that I took from our visit to the Amsterdam museum that celebrates his extensive work.  In his short life he experimented with a path into the clergy – and, he strenuously labored to find new techniques to portray the inner realities of his unique visual world.  His collaborative work with other artists of his day showed a level of collaboration that seems frequent in the work of our best innovators.  His transition into a mental institution did not diminish the flow of his evocative sketches and canvases.  Only later, when we cycled past the fields that he painted, and when we visited his grave in Auvers-sur-Oise, would the majesty of his vision start to become fully evident.

Joy at the Museum

From the Museum Collection