The idea of a bicycle tour suggests a slow pace. Indeed, in a sense, that is true. But the logistics of getting up in a different hotel each morning, packing one’s bags with all clothes, dressing with the appropriate layers of bike clothes (more on weather later!), and eating a huge breakfast with enough calories to keep going, doing bike prep… Riding all day… Getting set up in a new hotel (which may have a unique approach to wifi), doing a briefing for the next day’s ride, eating a 7 course European meal…

Anyway, today (May 20) is a rest day – no riding and good wifi.
Therefore, a summary of a few days of travel.

This was the day where lurking in our minds was the question, ” And we paid to do this…?”

We had a lovely ride on the Radroute, which is a flat route beside the Adige River nearly all day. But we and others in our group managed to get lost more than once..about a g-zillion times, which can be quite amusing until you climb the same mountain twice, when you shouldn’t even be on it!!!
We logged 51 miles on a day that we thought would be a mere 38. Oh well – it does give you license to eat whatever you want without any guilt whatsoever.

We saw Otzi the Iceman, entombed in a tomb the temperature of a a glacier where he stayed for over 5000 years before being discovered by some hikers. {From the Urban Chick}

{From the Beaded Beak – below:}

Otzi gives a fascinating view of a time at the dawn of recorded history – 5,000 years ago. From his clothes, his tools (hunting, medicine, embers of a fire that could be transported), the civilization from which he came had achieved an astonishing level of sophistication. With deep understanding of the uses of natural plants, with the ability to cultivate crops and integrate a complete diet (meat, grains, honey, fruits…), we see a form of life that bespeaks a collaborative culture.

The differences of culture can be as significant 50 kilometers down the road today. In Burgeis, despite the Italian government, the common language is German. The agriculture is alpine. By the time we arrive in Termeno, the language and fields of crops has started to change.

Another day of following (or, trying to follow) the bike path, the Radroute.

Navigation could be a separate subject by itself. (There may be “after the ride” entries to reflect on some aspects of this…) But soon, after our departure from the hotel, Urban Chick and Bearded Beak were flying solo.

At least until two other couples from our group who had explored small towns along the route joined to form a 6-person navigation team.

Despite differing opinions on how to interpret maps and cue-sheets, we found a lovely spot for lunch. And, a collaborative approach to replacing an inner tube after a flat tire. Group travel has profound advantages.

Our lovely hotel that evening had what appeared to be elegant monk-cell bedrooms. Perhaps a good location for penitents praying for forgiveness of the sin of poor navigation.

Better navigation skills and a path through small villages nestled into the face of the Dolomites produced interesting climbs. But, also a chance to see a wedding occur in the main square of a small village. The entire town turned out in best clothes – with local wine as a prelude to the actual wedding. Quite festive.

The descent into Riva Del Garda was steep – possibly 15 degrees. With spectacular views along the way. (Hard to take good pictures @ 50 kph.)

Did I mention that BAC folks like to eat? When the parking lot of your 4 star hotel has Porsches and a Maserati, you know that the food will be delicious. 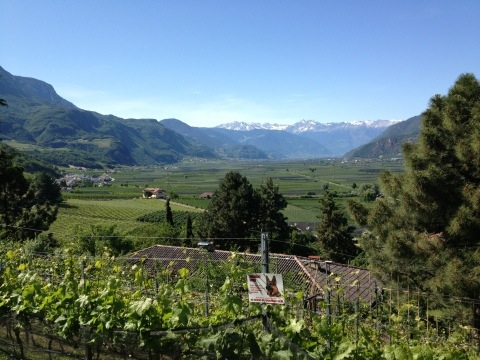 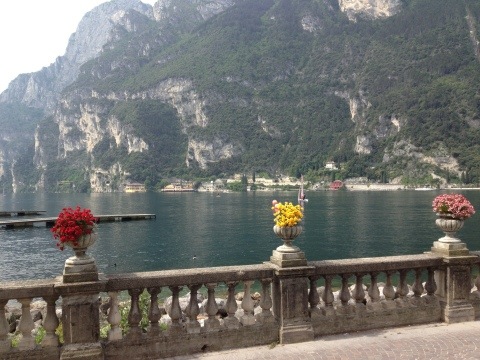 1 thought on “Beyond Merano”